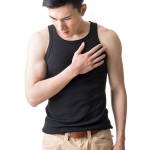 No, this is completely normal. Guy’s nipples can become erect (hard) during sexual intercourse. This is thought to happen in both males and females during sexual arousal due to the release of the hormone oxytocin (the same hormone that causes a woman’s nipples to become erect during breastfeeding).