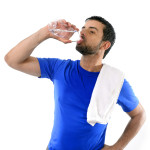 The term for drinking too much water is water intoxication. This condition is rare, but can happen when a person drinks a huge amount of water in a short period of time (equivalent to drinking 5- 10 two liter bottles within a few hours). Having this much water can cause the sodium (salt) levels in the body to drop (a condition known as hyponatremia). When this happens, the cells in the body begin to swell which can cause confusion, severe headaches, dizziness, nausea, vomiting, bloating, seizures, comas, and even death.

It’s important for athletes to drink plenty of fluids to prevent dehydration. However, athletes who are active for long periods of time could be at risk for water intoxication if they don’t include some food or fluids that have sodium in them to replace the sodium that’s lost from sweating. This condition can easily be avoided by eating a small snack or drinking a sports drink during long periods of physical activity. Tell someone immediately if you get a headache, or feel nauseous or dizzy during exercise.