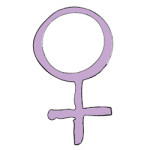 It’s possible that your girlfriend has bacterial vaginosis, however, she should make an appointment with her health care provider and get checked.

Bacterial vaginosis is a type of vaginal infection. Women at any age can have it – even teens and adult women who have never been sexually active, but it’s more common among young and older women who have had sex with one or more partners.

Although many women who have BV don’t have symptoms, the ones that do often complain of a fishy smelling vaginal odor and a milky-white, or gray vaginal discharge that’s either light or heavy. The odor can become worse at the time or your period or after unprotected sexual intercourse. When semen (male sperm) mixes with vaginal secretions, the odor becomes stronger. Less common symptoms include: vaginal itchiness, redness, and pain with intercourse.

There is treatment for BV, but she’ll need to see your health care provider first to be checked. If she has BV you’ll get a prescription for a vaginal cream, gel, or a medicine that’s taken by mouth. If left untreated, BV can cause a more serious infection called pelvic inflammatory disease (PID).