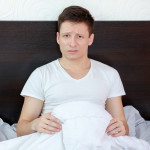 Thanks for bringing this up. A wet dream is when a teenage male has a dream which has sexual thoughts which leads them to ejaculation. Your body responds to a lot of things in your dreams much as it would in the real world. For example, if you had a scary dream, you might wake up to find your heart beating fast. In the same way, if a teen has sexual thoughts, he might ejaculate and there isn’t anything he can do to control it, so its nothing to be ashamed about.

Wet dreams are common in the teenage years, but definitely not universal. Some guys have them, some guys don’t. It doesn’t mean you are weird or unhealthy if you haven’t had them by a certain time. It doesn’t mean there is a problem with your penis or semen. I wouldn’t be worried about it at all.

Some patients I have seen have had the opposite problem – they are worried that they can’t stop wet dreams and think it means they are thinking about sex too much, which isn’t true either. The bottom line is you can’t really control what you dream about, it’s very common to have sexual dreams, but not at all bad if you aren’t.