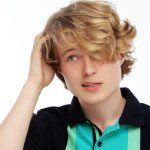 They don’t really itch or hurt or anything. I thought they would go away after a while but they didn’t. I haven’t had money to go to a doctor and I was embarrassed to mention it to anyone. Ive had sex with three girls since thirteen and they didn’t say anything to me long after we had sex.

This sounds like a situation that has caused you a lot of distress. Unfortunately, it’s not possible to tell without seeing the bumps exactly what they are. If they were present before you started having sex and don’t hurt or itch and have been there that long, they are probably nothing to worry about, but we can’t be sure without seeing them. I wouldn’t feel embarrassed talking about it with a doctor – this should be something that they see everyday. Have you had a physical exam since you were 13? A genital exam should be part of a yearly physical exam which should be covered by almost any health insurance and that would be one way to get it looked at.