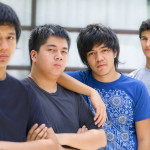 If you’ve ever had to deal with cliques, you already know that it can be mildly annoying to really frustrating, and sometimes very hurtful. Learning ways to cope with cliques will help you realize that you don’t need approval from a group to feel good about yourself.

What is a clique?

A clique is a group of friends that pick and choose who is in their group and they leave certain people out on purpose. It is important to understand that not all groups of friends are cliques. Everyone in the clique may not share the same beliefs and they may not want to make fun of people outside of the clique, but they play along because they don’t want to be left out. Instead of caring for each other and creating lasting friendships, sometimes people involved in cliques seem to only care about themselves and the things they are interested in. Cliques may target victims (who are not members of their clique) and tease and bully them for being different or sometimes for no apparent reason. Members of a clique may be more concerned about their social standing within the group rather than making friends.

Who belongs to cliques?

Cliques often affect people of all ages. They can be found in elementary school, middle school (especially), high school, college, and in the workplace.

What’s the difference between friendships and “cliques”?

Many people have at least one person in their life that they can proudly call their “best” friend, as well as a social group in which they feel very comfortable. Your close friends usually know a lot about you, such as your favorite color, where you like to shop, your favorite food, and your beliefs about certain things. They are genuinely concerned about YOU as a person. You may have a close group of friends with whom you can be yourself without being nervous about what they might think. In cliques you might feel shy to show others your silly side or your true feelings about things for fear of being teased. In a clique you’re supposed to share one set of beliefs, unlike true friendship when differences in personalities and beliefs are appreciated.

What’s so great about being in a clique?

Tweens, teens, and sometimes even adults may see a clique as a way to make friends and become popular. For someone who is more of a follower than a leader, cliques help make it easier to be included because the rules are usually clear. Cliques may be tightly controlled by the most “popular” person and his or her close allies. They typically have the ability to decide who’s cool and who’s not, and what behavior is acceptable and what is not. This can feel uncomfortable for those who are left out.

What’s the difference between cliques and clubs?

Cliques are usually closed to people outside of the group. Clubs are different because they are open to people who share common interests such as, a computer club, music club, or math club. In cliques there is often a lot of pressure to act the same. In clubs, people tend to share ideas and respect the opinions of others.

How do you avoid being part of a clique?

It may feel good to be approached by someone who is in a clique. You’re not alone-most people want to feel accepted and popular, particularly at school or in new social situations, but don’t fall for what appears to be a quick way to go from being unnoticed to being cool and popular! Realize that you are special and unique and you don’t need approval from anyone else.

Here are some helpful tips:

How do you get out of a clique?

If you realize that you are feeling controlled by other people (in your clique), then it’s probably time to move on. More often than not, you can get out of a clique just by spending less and less time with the people in the group. Sometimes though, it may take courage to stand up for what you believe in and tell the people in your clique that you don’t like what they are doing and you don’t want to hang out with them anymore. The bottom-line is that you should only spend time with people that genuinely care about you and allow you to be yourself.

People like others who are sincere, trustworthy, thoughtful, considerate and fun. When you behave in way that is respectful of others, people will naturally want to be around you. Remember, you don’t need the approval of others to be popular. You are unique, special, and one of a kind.