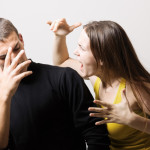 Dating can be an important part of growing up. It can help us learn communication skills and can help us determine what we are looking for in a partner. However, dating can also be stressful, and communication with a girlfriend or boyfriend can be difficult. Some teens find themselves in relationships where violence/abuse (emotional, physical, or both) is present. This guide and the dating violence quizzes can help you recognize the signs of dating violence, what to do if you are a victim of violence or you’re behaving in a violent way, learn the differences between a healthy relationship and an abusive relationship, learn what might cause a person to be violent in a relationship, and what to do if you or a friend is experience dating violence.

What is dating violence?

It’s important to know that both guys and girls can commit dating violence. In addition, girls aren’t always the victims of dating violence. Guys can be victims too. In fact, sometimes both partners commit physical and emotional abuse.

What is physical abuse?

Physical abuse is when a person touches your body in an unwanted or violent way. Physical abuse also includes sexual abuse, which is any sexual contact that you don’t want.

Some examples of physical abuse include:

What is emotional abuse?

Emotional (or verbal) abuse is when a person says something or does something that makes you afraid or feel bad about yourself.

Some examples of emotional abuse include:

Why would a person hurt someone they’re dating?

There are many reasons which might help to explain, but never excuse, why a person might abuse someone they have an intimate relationship with.

A person may be abusive to someone they are dating because:

Drugs and alcohol can also play a part in abusive behavior. There are some people who lose control and act abusively after they have been drinking or taking drugs. This is no excuse. Just because someone is under the influence of drugs and alcohol, or has a bad temper doesn’t mean that their abusive behavior is okay.

Even though there are reasons why a person may be violent, there is no excuse for dating violence. A person who is violent (emotionally or physically) should address the issue with a trained professional such as a counselor or therapist.

If you’re concerned about dating violence, here’s a tip on how to bring it up with your health care provider: How do I know when I’m in an unhealthy relationship?

What makes a healthy relationship?

Why do some people stay in unhealthy or violent relationships?

It can be hard to get out of a violent relationship – you can’t just turn off your feelings for someone you care about. Also, violent relationships often go in cycles. After a person is abusive, they may be extra nice and apologetic, and promise never to do it again. It may be a while before they act violently again.

Other reasons it can be hard to get out of an abusive relationship include:

People who are abused often believe that if they are nice enough, or behave well enough, their girlfriend or boyfriend will stop being violent – NOT TRUE. Abuse is not your fault, so changing your behavior won’t stop it. Whatever the reasons, leaving an unhealthy relationship is hard, and you will likely need help to do it.

Reasons to leave an abusive relationship: