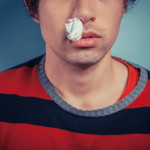 Nosebleeds are very common. In fact, 60% of  people living in the United States will have at least one nosebleed at some point during their life. Although it might seem scary while it’s happening, a nosebleed isn’t usually dangerous. Read on for more information about why a nosebleed happens, how to treat it, and ways to prevent it.

What is a nosebleed?

What causes a nosebleed?

There are many things that may cause a nosebleed (such as an injury to your nose), but the most common causes are dry air, allergies, colds, sinusitis, some types of nose drops, and nose picking.

When the air around you is dry (either from low humidity or heated indoor air) the membranes inside your nose can become very dry. This can cause an itchy crust to develop, and if you scratch or pick at it, it can cause bleeding. Your nasal membranes can also become irritated from allergies, colds, or sinusitis. Blowing your nose over and over again can cause bleeding as well.

What do I do if my nose is bleeding?

If your nose is bleeding, try your best to stay calm, and follow these steps:

After your nosebleed has stopped, don’t do anything that would cause you to strain. Make sure that you don’t blow or pick your nose for about 24 hours.

What happens if my nose doesn’t stop bleeding?

Most nosebleeds will stop either on their own or by following the steps above.

You should get emergency care if:

What if I get nosebleeds a lot?

If you have frequent nosebleeds such as more than once a week, talk with your health care provider. He or she will ask you if other members of your family have a lot of nosebleeds or a bleeding problem and may want you to have a blood test to check for anemia and clotting problems. Treatment depends on the cause (injury, allergies, infections, clotting problems etc.).

Is there anything I can do to prevent a nosebleed?

Yes. Things you can do to help prevent nosebleeds include the following:

If you’re concerned about nosebleeds, here’s a tip on how to bring it up with your provider: “I get nosebleeds a lot, is there anything I can do?”