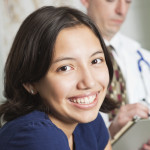 When a guy goes through puberty, he’ll experience various changes in his body. He’ll grow hair in places he didn’t have it before, his voice will change, his penis and testicles will grow, and he might develop acne. But what about girls? Have you ever wondered goes on with girls’ bodies when they go through puberty?

Do girls start puberty at the same age as guys?

Why do girls grow breasts?

Breast development (also called “thelarche”) is the first sign of puberty for many girls. As a girl’s body starts to develop, a small bump (called a breast bud) begins to grow under each areola (the dark area around the nipple) and nipple. The “buds” continue to grow, and eventually form breasts, which are made up of fatty tissue and mammary glands. The mammary glands serve a very important purpose – when a woman is pregnant, they produce milk that a woman can feed to her baby.

How come some girls have bigger breasts than others?

Breast size is primarily determined by heredity (a characteristic or trait that is passed down by genes). If a girl’s mom or grandmother has large breasts, she may be more likely to have large breasts when she grows up, and if a girl’s family members have small breasts, she may be more likely to have small breasts. Breast size can also increase or decrease if a girl gains or loses a lot of weight, but for the most part the size of her breasts will stay the same once she’s finished puberty, which takes about 5 years. During the teen years, girls’ breast sizes will vary depending on how early (or late) they start to develop.

Do girls get hairy too?

Yes. Girls start to grow hair under their arms and in their pubic area just like guys do. At first there may only be a few thin hairs, but it will eventually grow in to be thicker and curlier.

When a girl reaches puberty, her ovaries (small egg-containing organs that are located on both sides of the uterus) make hormones that cause menstrual periods. The pituitary gland (located in the brain) releases chemical messengers called gonadotropins (FSH and LH) that “tell” the ovaries to produce estrogen and to release a mature egg once a month (See illustrations below). This egg travels towards the uterus. If the egg isn’t fertilized by a sperm, the thick bloody lining that builds up in the uterus passes out of the body through the vagina as blood (a “period” or “menstrual period”) two weeks later. This whole process is called menstruation. 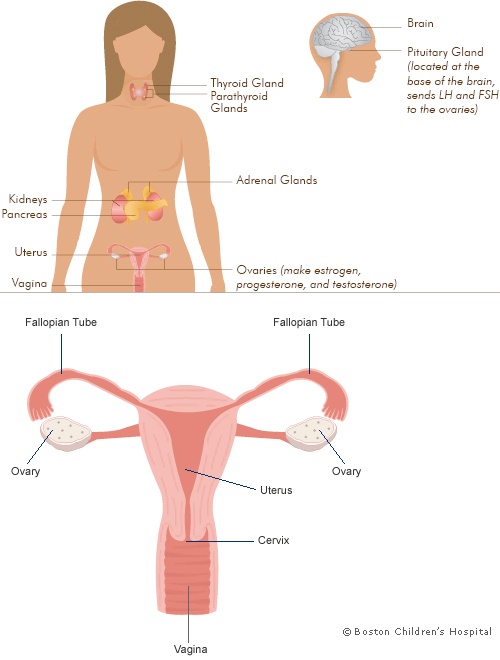 What’s all that stuff that girls use for their periods?

When can a girl get pregnant?

Here are some important things you should know about pregnancy:

Are there any other changes that girls have but guys don’t?

During puberty girls and guys have a lot of similar changes, such as pubic hair growth, the development of acne, and growth spurts. However, in addition to getting a period, which guys don’t get, girls also start to notice vaginal discharge during puberty. Vaginal discharge is a fluid that helps to clean and moisten the vagina. It’s usually white or very slightly yellow in color, and may be sticky, thin, or thick. This fluid is completely normal.

If you’re curious about puberty in girls, here’s a tip on how to bring it up with your provider: “I know what’s going on with my body, but what happens with girls?”