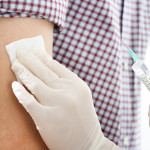 Many years ago, it became clear that too many teens were getting sick from “whooping cough,” also known as pertussis. Young children get vaccinated for whooping cough, but the protection often wears off by the time they become teens. Teens now get a booster in the same shot with tetanus and diphtheria (Tdap) at age 11-12 years old to prevent whooping cough later

What is pertussis and how do you get it?

Pertussis is an infection that causes severe coughing episodes that can cause trouble breathing and difficulty sleeping as well. The bacteria that causes the infection is called Bordetella pertussis. Pertussis is also called “whooping cough” because of the “whoop-like” sound that can be heard, when someone who has it breathes in air.

It normally starts with cold-like symptoms: a runny nose, a mild fever, and a minor cough. After 1 to 2 weeks, the cough begins to get worse and lasts for many weeks. Sometimes the cough is so bad that you can throw up. A person catches pertussis if they come in close contact with another person who has it. A person who is infected with pertussis is most contagious during the first 2 weeks after the cough begins. Because the symptoms of pertussis in its early stage appears as a common cold, it’s often not diagnosed or treated until more severe symptoms occur, putting many people at a high risk of infection. When a person who has pertussis sneezes or coughs, tiny droplets of bacteria (that you can’t see) go into the air. People who are nearby can breathe in the pertussis bacteria, which can then cause whooping cough.

Who is at risk for getting pertussis?

Anyone can get pertussis. Babies are at greatest risk since they are not well protected from pertussis until they get all their pertussis shots. It is recommended that pregnant women get the vaccine between the 27th and 36th week (of pregnancy) so they can pass antibodies against pertussis to their babies. By 15 to 18 months, a child should have received four pertussis shots with a fifth one just before starting school. Teenagers and adults are also at risk because the protection from these early vaccines wears off over time. Anyone living or spending time in close quarters, such as in college dormitories or in classrooms, is at higher risk for getting pertussis because it spreads so easily from person to person.

How many people get pertussis each year?

In the early 1940s, before the vaccine was available, about 200,000 people in the United States got pertussis each year. As you might imagine, after people started getting vaccinated, fewer people got sick. However, teenagers and adults can get pertussis, most likely because the vaccine from childhood wears off over time. According to the Center for Disease Control (CDC) in 2012 there were about 16 million cases of pertussis reported worldwide. More than 48,000 cases were reported in the United States alone. Researchers believe that there are still many more cases of pertussis that are not diagnosed or reported.

How can I protect myself from getting pertussis?

One of the best ways to help protect yourself from pertussis is by getting the Tdap vaccine (tetanus, diphtheria, acellular pertussis). The Tdap vaccine was approved for use in 2005. It’s a vaccine created for teenagers and adults to prevent three different bacterial infections: tetanus, diphtheria, and pertussis. Tdap is a booster shot, meaning it will help remind your immune system to fight against infection if you have received the first group of pertussis shots, called DTaP (Diphtheria, Tetanus, acellular Pertussis), when you were younger.

DTaP is the pertussis vaccine most people receive when they are a baby and young child. Unlike the Tdap booster shot, DTaP is stronger and given in five different shots at 2 months, 4 months, 6 months, 15-18 months of age, and before starting school (age 4-6 years). You need to get all the DTaP vaccines to help your body make the antibodies that target pertussis. Antibodies are small particles created by your immune system to fight infection.

How does the vaccine work?

The way the vaccine works is actually pretty simple. When you get the DTaP vaccine, you are getting parts of the inactive pertussis bacteria. “Inactive” means that the part of bacteria in the vaccine is not able to cause an infection. Once you get the shot, your body makes antibodies to fight the inactive bacteria. These antibodies also help protect you if you come in contact with someone who has pertussis.

At what age should I get the Tdap vaccine?

The Tdap vaccine is recommended at your 11-12 year old checkup with your healthcare provider. However, you can receive the vaccine anytime between 11-18 years of age in order to protect yourself from pertussis.

There are two kinds of Tdap vaccines that have been approved by the Federal Food and Drug Administration (FDA):

How many shots do I need?

As a teen, you need a single booster shot if you already had the first group of DTaP vaccines when you were a baby and young child. Check with your health care provider to make sure you had the first five DTaP vaccinations before getting the Tdap booster vaccine. If you get pregnant, you need to get a Tdap with every pregnancy at the 27th to 36th week to give the newborn protection against pertussis.

How long will I be protected from pertussis if I’m vaccinated?

It’s not known exactly how long the Tdap booster shot will protect you from pertussis. Although the vaccine does not prevent pertussis 100% of the time, the vaccine will greatly decrease the chance of getting a pertussis infection.

If I get vaccinated and then come in contact with someone with pertussis, do I need to do anything?

Yes, it’s recommended that anyone who comes in close contact with someone with pertussis call or make an appointment with his or her health care provider (HCP). Your HCP may have you take an antibiotic, a medicine that helps kill the pertussis bacteria. This will help decrease the spread of whooping cough to others, especially young infants, although your chances of getting pertussis infection are much less if you receive the Tdap vaccine.

Are there any side effects?

After getting the pertussis vaccine, it’s possible to have:

It’s very uncommon to have side-effects from vaccines. If you think you might have had a side-effect from a vaccine, talk to your health care provider. You can also call 1-800-822-7967, or log on to vaers.hhs.gov.

Is there any reason I should wait or not get the Tdap vaccine?

Most teens can get the Tdap with no problems. However, there may be a reason why you should wait or not get the vaccine. Check the questions below. If you answer yes to any of them, be sure to talk to your health care provider about whether it’s a good idea for you to get the Tdap vaccine.

Is there anything I should ask my health care provider before I get the vaccine?

Yes. It’s a good idea to ask your health care provider the following questions so you can learn about your vaccine history.

Talk to your health care provider to make sure you are up to date on your vaccinations. Vaccinations are the best way to prevent many potentially life-threatening illnesses including pertussis. If you would like to learn more, check out the Center for Disease Control (CDC) website at: www.cdc.gov/vaccines

If you’re concerned about whooping cough, here’s a tip on how to bring it up with your health care provider: “Do I need the whooping cough shot?”