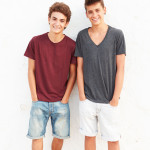 The rate at which a guy grows (becomes taller and gains more body mass) depends on several factors such as their genes or their “genetic blue prints” and nutrition. On average, most guys go through puberty between the ages of 12-16 years of age. Some guys may begin puberty earlier or later, however. Most guys will stop growing by the time they are 18 but a few may continue to grow until their early twenties.