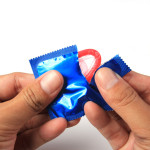 Thanks for your question and congratulations for using condoms to prevent sexually transmitted infections and pregnancy! Some guys who have difficulty maintaining an erection with condom use may give up using them, which greatly increases their risk of getting (and spreading) sexually transmitted infections (STIs). We give you a lot of credit for asking this question so you and your partner(s) can continue to have safe sex.

Here’s some advice that may help you maintain an erection, while putting on a condom.