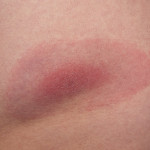 If you live near the coast in the northeast part of the United States, the mid-Atlantic region, Wisconsin, Minnesota, Virginia, Iowa, Pennsylvania, Michigan, California, or some parts of Europe or Asia, you may have heard about Lyme disease, as most cases occur in these areas.

What is Lyme disease?

Lyme disease is a bacterial infection that’s caused by the bite of an infected tick. The name “Lyme” comes from the town of Old Lyme, Connecticut where the illness was first recognized back in the mid 1970’s. Ticks most often live in tall grass or in heavily wooded areas. Although it’s a year round problem, April – October is said to be “tick season” (in the United States). June is the peak month in the northeast. Symptoms can be mild to severe, but most people get better with treatment.

Who is at risk for Lyme disease?

Lyme disease is caused most often by a bite from an infected deer tick. The deer tick is much smaller (about the size of a freckle) than the dog tick. There are other illnesses that are caused by ticks, but Lyme disease is definitely the most common type of tick-borne illness in North America and Europe.

What are the symptoms of Lyme disease?

A person can get bitten by an infected tick and not have any symptoms of Lyme disease (or not have symptoms later). Others have symptoms. If you develop Lyme disease, you may notice a small red bump (where the tick attached) within 3-14 days after the bite of an infected tick. The bump is often warm to the touch and slightly sore. The bump usually spreads into a rash that looks like a “bull’s-eye”–pink in the center and deeper red on the outside called “erythema migrans.” 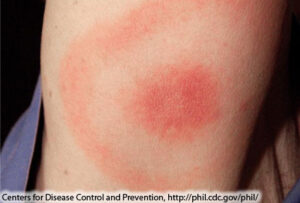 Other signs can appear after several days or weeks, and are similar to flu symptoms:

Later, more advanced symptoms may include:

How is Lyme disease diagnosed?

Lyme disease can be hard to diagnose because not everyone has symptoms. The most common symptom is a rash, which 70-80% of people with Lyme disease get. Therefore, diagnosis is usually based on symptoms, history of a tick bite, and/or recent time spent in areas where Lyme disease is common.

A blood test(s) is usually done to check for antibodies to Lyme disease (antibodies are substances produced by your immune system to fight infection). However, because our bodies don’t make antibodies until a few weeks after an infection, the blood test may be negative if checked early and with treatment may never be positive.

What happens if I’ve been bitten by a tick?

If you are sure it was a tick, simply flush it down the toilet. Don’t:

Know when you are at risk and protect yourself against Lyme disease. If you are bitten by a tick, call your health care provider to see if you need to make an appointment and get treated, if needed. If your HCP feels you are risk of getting infected (the tick was attached for 36 hours or more), you may need to have a blood test and/or take an antibiotic. If very early, the blood test may still be negative.

What is the treatment for Lyme disease?

The standard treatment for Lyme disease is antibiotics taken by mouth. The best antibiotic is Doxycycline, but Amoxicillin and Cefuroxime are also good for treatment. The length of treatment may vary depending on symptoms and the type of antibiotics used. If you are taking Doxycycline you may only receive one single dose or you may receive a 10-28 day course, depending on symptoms.  If symptoms progress, intravenous antibiotics may also be prescribed, requiring hospitalization.  . The Food and Drug Administration (FDA) warns people not to take an injectable medicine called “Bismacine” for Lyme disease which is sometimes prescribed by alternative medicine practitioners.

How can you prevent Lyme disease?

If you spend time in areas where Lyme disease is common, you can lower your risk by protecting yourself.

Your best bet to prevent getting infected with Lyme disease is to follow the above tips. If you do get bitten by a tick, talk with your health care provider about whether you need treatment.