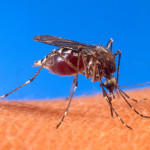 General Info & How to Protect Yourself:

Bug bites and stings are common, especially in the summer. Most of the time a bite or sting from an insect is harmless and will heal on its own. Rarely, a bug bite or sting can cause an infection or an allergic reaction that needs medical attention right away. Certain kinds of ticks and mosquitoes however, can transmit serious illnesses such as Lyme disease, Eastern Equine Encephalitis (EEE), West Nile Virus, Chikungunya, Yellow Fever, Malaria, and Zika, depending on where you live or travel to.

The best way to protect yourself from bug bites and stings is to avoid places where bugs are likely to be or wear long sleeves and long pants and insect repellant.

Here are some tips when you are planning to be outside:

Did you know that most mosquitoes are more active as the sun goes down and again during sunrise? You can lower your risk of getting bitten by planning outdoor activities in the early afternoon, but wear sunscreen to avoid damage to your skin.

Most often bee/wasp stings cause a minor discomfort and can be treated at home. However, if you have an allergy to bee or wasps or you get many stings all at once, you will likely need medical care right away. A mild reaction typically feels like a sharp, burning pain where you are stung. The area usually turns pink or red and swells up or looks puffy. The swelling usually goes away within a couple of hours. A moderate reaction is when the sting or bite looks very red and the swelling gets worse over the next few days. Let your health care provider know if you get this type of reaction. Severe reactions to a bee sting or other bug can be dangerous and even life threatening (anaphylaxis), requiring emergency treatment. Symptoms of anaphylaxis includes: swelling of your tongue and/or throat, rapid pulse, trouble breathing, severe itchiness, flushed or pale skin. Stings are usually painful at first but feel better quickly.

Bees often leave behind a stinger. Try to take it out of your skin as quickly as possible. You can use a clean pair of tweezers to pinch the stinger or you can use the side of a plastic credit card to flick it off of your body. Wasps don’t leave stingers.

Most of the time bee/wasp stings are not serious unless a person has an allergic reaction or if the bite becomes infected. Symptoms of an allergic reaction include a rash or “hives”; swelling of the lips; tongue or face; dizziness or fainting; trouble breathing. If any of these symptoms occur, it’s important to call 9-1-1 and get help right away!

Spiders usually don’t bite, but if they do, it can be painful. For those who have an allergy to spiders, a bite from a spider can be very dangerous. There are just a couple of spiders that are found in the United States that are poisonous. These are the black widow and the brown recluse spiders. When they bite, they inject “venom” (small amount of poisonous liquid) under the skin.

A reaction to a common spider bite is similar to other insects. Symptoms typically include: redness, and pain and swelling at the site. A scab usually forms in a week or so. Try not to pick or scratch the scab to prevent infection.

You can lessen the chance of getting bitten by a spider by avoiding them. Learn about where they live and what poisonous spiders look like. Insect repellents with DEET or Picaridin are also very effective.

Bites from mosquitoes are itchy rather than painful. They look like a very small puffy white bump that usually shows up soon after the mosquito bites the skin and feeds on blood. The puffiness is swelling that is caused from inflammation.

Eastern Equine Encephalitis (EEE): Eastern Equine Encephalitis virus (EEEV) is a rare but serious illness transmitted by an infected mosquito. It affects the brain in humans and can lead to permanent damage. Horses can also acquire EEE the same way humans get it According to the Center for Disease Control there were 38 confirmed cases are reported in the United States in 2019, a number that has quadrupled since 2014. People who live in areas where EEE has been reported (Florida, Georgia, Massachusetts, and New Jersey), and who spend a lot of time outdoors in these areas are at the greatest risk. Adults over 50 years of age as well as teens and children under the age of 15, are at greatest risk of severe disease (and complications) after being infected with the EEE virus. Symptoms include fever, headache, restlessness, sleepiness, no appetite, vomiting, diarrhea, and in very bad cases, convulsions and coma.

Malaria: Malaria is a very serious illness and major cause of death in certain areas of the world. Although it’s not found in the United States, you’re at risk if you live or travel to certain countries, especially in sub-Saharan Africa and South Asia. Mosquitoes become infected with one of four different types of parasites then spread it to humans when they bite. Symptoms include; chills, fever, vomiting, diarrhea, headache, and yellowing of the skin and eyes. If you are traveling to areas that are known to have malaria outbreaks, tell your health care provider. You can take medicine that will lessen your chance of getting malaria while you travel. No matter what, avoid mosquitoes; wear long sleeves/pants; and wear DEET insect repellant.

Yellow fever: Yellow fever is a very serious illness caused by the bite of an infected mosquito. You’re at risk if you live or travel to regions such as South Africa. Not every mosquito carries yellow fever. If you are bitten by an infected one, symptoms usually start 3-6 days later. Early symptoms include: headache, muscle and joint aches, fever, flushing and loss of appetite. Most of the time people get better within about 3-4 days. Those who don’t may have severe symptoms such as: an irregular heartbeat, bleeding and eventually, coma.

Talk to your health care provider well in advance before traveling to countries and regions where malaria and yellow fever occur so you can get vaccinated for yellow fever and take medicine to prevent malaria. You can also lower your risk of becoming infected by wearing protective clothing, using mosquito repellant with DEET, and sleeping in a screened-in area.

Zika virus: Zika virus is usually caused by the bite of certain infected mosquitos called “Aedes aegypti and Aedes albopictus.” The Zika virus is usually mild and people rarely die of it. Only about 1 in 5 people who are infected with the Zika virus will actually get sick; however, infants born to mothers who are infected are at risk of having a serious birth defect called “microcephaly” or small head. The Center for Disease Control (CDC) recommends women who are sexually active and not using a reliable method of birth control as well as women who are trying to become pregnant, should talk to their health care provider before traveling to areas known to be infected by the Zika virus. Anyone traveling to areas affected by the Zika virus should use methods to avoid mosquito bites. Zika virus can be spread by sexual contact. Ask your sexual partner(s) if they have traveled to an area affected by the Zika virus. Talk to your health care provider to find out if you are at risk and avoid having sex or use condoms every time you are sexually active. At this time there is no vaccine to prevent Zika virus.

Chikungunya: Chikungunya is another virus transmitted to people by infected mosquitos. Within the last few years, the Chikungunya virus has been active in the Caribbean and over 40 countries including Asia, Africa, and Europe. Although the virus is uncommon in the United States, there have been many reported cases in Puerto Rico and the U.S. Virgin Islands. Symptoms include fever and joint pain and usually appear within 3 to 7 days after being bitten by an infected mosquito. There is no vaccine to prevent Chikungunya. The best way to avoid the virus is prevention. Be prepared before traveling to areas where Chikungunya and other mosquito borne illnesses exist.

Dengue:  Dengue is a worldwide health problem. The mosquito that bites and infects people with Dengue carries 1of 4 similar viruses. Symptoms usually include a high fever and two other symptoms such as stomach pain, vomiting, red spots on skin, bleeding from the gums/mouth or nose, black stools, fatigue, pale/cold skin and trouble breathing, The virus is rare in the United States yet it is common in areas where the infected mosquitos exist (Puerto Rico, Latin America, Southeast Asia and the Pacific Islands). There is no specific treatment aside from treating the fever, rest, drinking plenty of fluids, and eating a healthy diet and there is no vaccine to prevent Dengue at this time. Your best bet is to prevent mosquito bites especially while traveling in known areas of Dengue outbreaks.

Tick bites are most common if you’ve been around a wooded area. If you or someone you know gets bitten by a tick (and it’s still attached to your skin), use the tips listed below to lessen the chance of infection. If you remove a tick within 36 hours after it becomes attached (based on exposure to ticks) and the tick is not engorged, the tick is less likely to cause Lyme disease.

Lyme disease: Lyme disease is an infection that is caused from an infected deer tick. The deer tick is very small – about the size of a small freckle. Lyme disease occurs mostly in the Northeast, upper Midwest and Pacific coast areas in the United States. Only infected deer ticks that attach to the skin can cause Lyme disease and the longer the tick stays attached, the more likely it will infect the person. If you develop Lyme disease you might see a red bump that spreads into a rash that often looks like a “bulls eye” (pink in the center and darker red on the outside). Symptoms of Lyme disease are similar to the flu. Early symptoms may also include chills, fever, headache, body aches and tiredness. Later symptoms can include swollen joints and general weakness. Bottom-line; if you think you have been bitten by a tick, call your health care provider.

Typical symptoms at the site of a bug bite or sting (symptoms may vary depending on the insect).

Serious reactions can be life-threatening and require immediate medical care. If you have any of the symptoms listed below, go to the closest emergency room!

World map of countries and territories where Zika virus is found and Travel Info: https://wwwnc.cdc.gov/travel/page/zika-information

The Center for Disease Control-  http://www.cdc.gov/ncezid/dvbd/