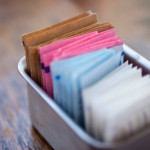 What are artificial sweeteners?

Artificial sweeteners are chemicals that are generally much sweeter than sugar, so a smaller amount isneeded to have the same sweetness as sugar. They typically provide very little to no calories and have no nutrients in them.

Examples of artificial sweeteners include:

Products containing aspartame have a warning label because they are NOT safe for use by people that have the hereditary disease Phenylketonuria (PKU). Pregnant women may be advised by their health care provider to avoid saccharin due to the unknown long-term effects.

Stevia is the common name for sweeteners such as PureVia® and Truvia® that are found naturally in the stevia rebaudiana plant. Unlike other sugar substitutes, stevia originates from a plant rather than being a manmade chemical. However, chemicals are still used in the processing of stevia. Stevia sweeteners provide zero calories and can be found in packets and in a variety of drinks and foods. If you are trying to avoid sugar substitutes, it is important to note that stevia sweetened products may say “naturally sweetened” so it’s always a good idea to check out the ingredient list, too!

What is monk fruit extract?

Monk fruit extract, or norbu, is the main ingredient in the sweeteners of Monk Fruit in the Raw®, PureLo® and Nectresse®. It can be found in foods such as Artic Zero® frozen desserts and some Starbucks® beverages. Monk fruit extract is made from the monk fruit, a fruit regional to Southeast Asia. The liquid from the seeds and the pulp of the monk fruit plant are squeezed out to obtain the juice. The juices of this fruit are extremely sweet, so can be used in very small quantities to sweeten foods and beverages, although it contains no calories. Just like stevia, products that say “naturally sweetened” may contain monk fruit extract.

What are sugar alcohols?

Sugar alcohols are carbohydrates found in plant products. In order to use sugar alcohols as a sweetener, they are altered in a laboratory environment to make them usable in sugar-free and reduced-sugar foods. They can be 25-100% as sweet as sugar and provide 1.5 – 3 calories/gram when compared to sugar (which provides 4 calories/gram). Sugar alcohols can cause gassiness and loose stools (diarrhea) since they are not completely digested by the body. Therefore, foods that contain sugar alcohols sometimes include the label “excess consumption may have a laxative effect.” It is also important to note that sugar alcohols, despite their low calorie count, are still carbohydrates so can still have an impact on blood sugar levels. Sugar alcohols are used in anything from sugar-free candy and gum to low-calorie baked goods and ice cream.

Examples of sugar alcohols include:

Eight sugar substitutes have been “generally recognized as safe” by the U.S. Food and Drug Administration (FDA): saccharin, aspartame, acesulfame potassium, sucralose, neotame, advantame, stevoil glycosides (stevia), and luo han guo fruit extracts (monk fruit). The FDA has also set an “acceptable daily intake” (ADI) for each sweetener, which is an amount they feel is safe to have each day. It is measured in milligrams per pound of body weight per day. These amounts, listed in the table below, are based on a 132 pound person and are higher than the amount most people should have in a day.

Sugar substitutes have not been shown to increase the risk of other diseases. Even though they might not necessarily be bad for you, the healthiest, most nutrient dense foods and drinks (such as fruits, vegetables, milk and water) don not contain sugar substitutes.

Are there any other sugar-free ways to make my food taste sweet (without adding sugar substitutes)?

There are other ways to make your foods more flavorful without adding sugar substitutes. Try adding spices such as nutmeg and cinnamon to yogurt, cooked cereals, cookies, or coffee. You can also experiment with flavors such as vanilla and cocoa powder in pudding and baked goods.

The majority of foods that you eat should come from nutrient-dense foods and drinks like fruits, vegetables, whole grains, lean protein, dairy, and water. Eating a balance of food groups, similar to MyPlate, will help your body get the nutrition it needs without having too much sugar or too much sugar substitutes.

Sugar substitutes can be used as a safe alternative to sugar. It’s important that we use them in moderation and eat mostly foods without added sugar or sugar substitutes.