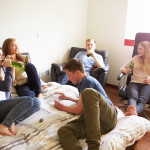 Alcohol is the most commonly used drug among teens in the US; even more so than tobacco or other drugs. Despite it being illegal, youth under the age of 21 are purchasing and consuming alcohol and engaging in risky behaviors such as binge drinking and driving under the influence. According to a national survey (Youth Risk Behavior Surveillance System, 2011), almost 40% of US high schools use alcohol and 25% binge drink (have 4 or more drinks at a time).

As a parent, it’s important to be educated about teen drinking and its effects on the teenage body, and what to do if your son has a problem with alcohol. Read on for more information and tips on how you can effectively communicate with your son about drinking related matters.

How do teens observe alcohol use?

It’s likely that your son has seen people drinking alcohol before he became a teenager. Many kids observe alcohol use at home by parents, older siblings, or other members of the family. They may see alcohol used in social contexts such as having a beer at a ball game, a glass of wine with dinner, or during religious ceremonies.

Teens also see alcohol use on TV, in the movies, online, or via friends, family, or at parties. There’s no way to keep your son shielded from exposure to alcohol, but what you can do is ensure that he’s educated about the consequences of drinking.

What are the effects of alcohol on the teenage brain?

Scientific evidence now shows that the brain doesn’t fully develop until a person is in their 20’s, or even 30’s. This means your son’s brain is still developing, and alcohol could impair that development. The last part of the brain to develop (the frontal lobe) affects both judgment and impulse control. So as a teen, your son is more likely to make risky decisions anyway, and this is especially true when using alcohol.

Addiction: As a teen, your son is retaining new information and learning new behaviors. In the brain, the process of general learning is actually the same process as developing an addiction. So even if your son only has a drink occasionally, he’s exposing his brain to the learning process of drinking alcohol, which can lead to addiction later on.

Killing brain cells: Teens are more likely to experience loss of brain cells than an adult male in his 30’s, even if he drinks the same amount of alcohol over the same period of time.

How do I discuss alcohol with my son?

Although it may feel awkward, it’s important to talk about alcohol use with your son. The conversation shouldn’t happen all at once. Ongoing communication throughout his adolescence is key. Remember that talking with, not at, your son is important. You want him to feel that he’s part of a conversation, not listening to a lecture.

Topics to talk about include:

How can I be a good role model for my son?

Teens learn by example. When it comes to being a role model for your son, it’s important to do the following:

How do I deal with social situations where my son may be exposed to alcohol?

Underage drinking is illegal, but many adolescents choose to experiment before they turn 21. Even if your son isn’t drinking alcohol, his friends may be, and it’s important for you to set ground rules for social situations where he may be exposed to alcohol.

Make sure that your son:

Encouraging your son to be open with you is extremely important. Assure him that you will be there for him no matter what, and that you won’t punish him for being honest with you. If he’s at a party where alcohol is being served and he needs a ride home, let it be known that he won’t get in trouble for calling to ask for a ride home.

What should I do if my son experiments with alcohol?

In the event that you find out that your son is drinking, have a calm discussion with him about it. He should know that there is no punishment for being honest, but that he does need to abide by your rules. If he breaks them, enforce the consequences you agreed upon.

What are the indications that my son has a drinking problem?

Indications of a drinking problem may include the following:

How can I help my son if he has a drinking problem?

If you believe that your son has a problem with alcohol, there are many ways you can help. Talk with your son’s health care provider or a mental health professional regarding options including therapy, support groups, and in-patient or out-patient rehabilitation.

Provides educational materials on alcohol abuse and alcoholism as well as phone numbers of local NCADD affiliates who can provide information on local treatment resources.