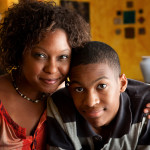 Communicating with your teenage son can be challenging particularly during times of disagreement or when enforcing a curfew. However, you might also find that at times trying to have a daily conversation with him can be difficult too. Although your son is becoming independent he is still reliant on you for many things, including an emotional/social connection. This guide will provide you with tips on how to engage in a conversation with your son, whether it’s a discussion about house rules or a chat about his interests.

Teenagers are spontaneous, as you have more than likely discovered. The pre-frontal cortex of the brain, which manages decision making and planning behaviors, is not yet fully developed. This is one of the primary reasons as to why your son may wait until the last minute to write a term paper or why you may find it difficult to schedule a weekly check-in chat with him. The first way to encourage open communication is to be available for a conversation that may happen at any time. For example, during a car ride home from practice or for an hour at night when everyone is winding down before bedtime. When he wants to spark a conversation, even if it’s for a short chat, you should be open, and not questioning.

Teenage boys are not only spontaneous, they also have a lot of energy. It might seem like their inability to sit still prevents meaningful conversations, but it can actually be used to your advantage in creating conversations. Taking a walk with your son or allowing him to work or move his body while talking to him can facilitate more thoughtful discussions. This can also help if he tends to be guarded or shy about his thoughts/feelings because it allows him to focus on something other than the conversation.

When you have a conversation with your son it’s important to keep the focus on him. The first way to do this is to figure out how he can benefit from the conversation. As an adult with more knowledge and experience, it can be tempting to want to pave the path to success for him, but teenage boys don’t always want advice. Unless it is a situation that concerns safety, try taking a moment to take a step back and ask what he wants. For example, ask, “Would you like my advice on ways to handle X, Y, Z or would you rather I just lend an ear so you can talk it through?” When you give your son opportunities to talk and express his thoughts and/or feelings, it sends a message that you respect who he is as an individual and what he has to say is important. He  will be more inclined to be open if he doesn’t feel like you are lecturing or judging him.

It’s not always easy for a young man to use words to express his feelings so pay attention to your son’s facial expressions and body language. For example, your son may say, “everything is fine,” but his brows may be furrowed, his arms may be crossed, or his hands may be clenched. This type of body language or gesture may indicate that he is feeling angry, frustrated, or upset.  It’s easy to interpret these cues as him being disobedient or disrespectful.  However, remember to keep the focus on him. Ask yourself why might my son be feeling this way and why is it hard for him to express his feelings? Let your son know that you’ve picked up on his behavior (body language) and that you care about him. For example, say something to the effect of: “I noticed that you seem a little off today and I wonder if something happened that made you upset. If you want, we can talk about it now or when you are ready- I will be here.”

The example above leads in to the next helpful tip of giving your son space. He might have come home from school and threw his backpack in the corner or he might have ended a disagreement with you by retreating to his room. Whatever the situation may be, if it brings up negative feelings, your son will most likely need time to process them. Making your son sit with you until his mood or opinion changes can often make situations worse. It’s helpful to let him calm down and reflect on what has happened. Check in on him in a few hours or wait until the next morning. Always make sure that you are feeling calm too because your son will naturally imitate your behavior. Below are a few examples of what you might say to your son during a follow-up chat:

Your son will have opinions on a variety of things (many, many things) and that’s good. In fact, this is healthy because it’s an indication that he is growing up. As long as those opinions are not a threat to his safety or the safety of anyone else, it’s best to let him maintain his opinions…even if you don’t fully agree with them. Show him you admire the individual that he is becoming by respecting his opinions on anything from movies to politics. Instead of trying to educate or lecture him about why his opinion is wrong, let him know: “I like that you are confident in yourself and have strong opinions, even if we disagree.” Hopefully, this tactic will lead to more open conversations.

Above all else, it’s important to remain the adult (rather than try to be his friend) and recognize that you are in control. At the end of the day, you are his parent and you are the one that keeps him safe. In other words, you have to set limits that he may not agree with. While remaining firm you can encourage him to discuss his thoughts/feelings and opinions with you. However, sometimes you have to prepare yourself that even under the best of circumstances, a discussion may not go as planned. Remind yourself how you want to act in a situation or conversation no matter how he is acting. For example, if you are setting a limit because of safety and he becomes frustrated, remind yourself that you need to act calmly and rationally no matter how he behaves. This may imply that you speak firmly in order to maintain the limit and later follow up with him on why you could not be flexible and ask him how this made him feel.

Conversations with your son can be challenging but don’t let this keep you from trying. Talking with your son, even if they are short little chats, not only helps to develop your son’s social and emotional skills but it can also deepen your bond. He will appreciate it (even if he doesn’t admit it) and you will get to take pride in witnessing the young man you helped raise. Use some of the tips above and try not to get discouraged if it takes time. If you continue to find it challenging to communicate with your son, think about meeting with a counselor/therapist who can help facilitate a more open and positive conversation.