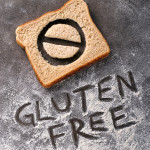 You’ve probably  heard about the gluten-free diet on social media or from friends or family – or just from seeing products advertised as “gluten free”. Despite what some people may think, the gluten–free diet is not a weight loss diet. The gluten–free diet is medically necessary for people who have been diagnosed with celiac disease, an autoimmune disorder that’s triggered by gluten and is prescribed by a health care provider. Those with non-celiac gluten sensitivity will also have been recommended to follow a gluten-free diet by their health care provider. For people with celiac disease, a gluten–free diet must be followed to heal the body and reduce signs and symptoms of the disease. Following a gluten–free diet can seem overwhelming at first, but it’s really not as hard as it might seem. If your doctor has told you to eat only gluten-free foods, once you learn which foods to avoid and which foods you can eat comfortably, you’ll feel much better

Gluten is a protein complex found in the grains wheat, barley, and rye. Flours made from these grains are commonly used to make foods such as breads, cereals, pasta, pizza, and baked goods. The gluten gives these foods an elastic texture and helps provide the structure.

Why would someone need to follow a gluten–free diet?

Anyone with celiac disease should follow a strict gluten–free diet to avoid causing long term damage to the small intestine (see image) as well as an array of symptoms. If your health care provider tells you that you have gluten sensitivity you should also follow a gluten-free diet in order to avoid any symptoms you may have.

What is celiac disease?

Celiac disease is an autoimmune disorder that is triggered in some people when gluten-containing foods are eaten. An autoimmune disorder is one in which the body’s immune system attacks an organ. When a person with celiac disease eats a food with gluten in it, the immune system launches an attack against the small intestine which damages the lining of the intestine. Noticeable symptoms of celiac disease are diarrhea, abdominal (stomach) pain, unintentional weight loss, anemia, poor appetite, irregular periods, delayed growth, and delayed onset of puberty. There may also be other noticeable symptoms such as a skin rash, headaches, and fatigue. Some people have almost no noticeable symptoms, but their health care provider may detect a nutritional deficiency (such as low vitamin D levels) or low bone mineral density.

What is gluten sensitivity?

I feel better when I don’t eat gluten – do I need an official diagnosis from my health care provider?

If you think that you might have celiac disease, an allergy to wheat, or gluten intolerance, you should consult with a medical professional rather than simply starting to avoid gluten. Your health care provider will likely want to run some tests while you are still eating gluten in order to give you the best medical care.

Things to keep in mind…

A gluten-free diet isn’t always a healthy diet. Some people who follow a gluten-free diet may not get enough of certain nutrients, vitamins, and minerals in their diet such as fiber, iron, and calcium. Also, some gluten-free products can be high in calories and sugar. If you are diagnosed with celiac disease, it’s best to meet with a dietitian to develop a healthy, balanced meal plan and to identify if any vitamin or mineral supplements are necessary. Do not follow a strict gluten-free diet if not medically necessary.

There are many hidden sources of gluten both in food and non-food products. Gluten could be in foods that you wouldn’t expect –such as candy, sauces, soups, and marinades. Be sure to check products such as toothpaste, mouthwash, lipstick/gloss, glues, play dough, supplements, vitamins, and both prescription and over the counter medications. Check with your pharmacist and ask your health care provider to write, “Medication must be gluten–free” on any prescriptions. Many soaps, shampoos, and lotions contain wheat or oats. While gluten cannot be absorbed through the skin, it is important to be aware of this – especially if you have a habit of biting your finger nails or touching food after putting on lotion.